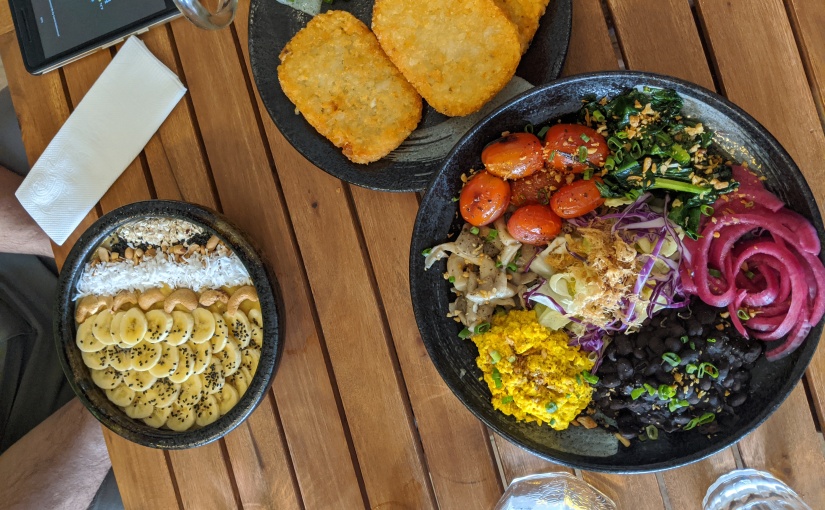 Since Dalat is a mountain town it was on the pricier side of what our usual budget was.  We try to stay around $2-$4 per person when it comes to food, which is easily doable. Trip Adviser of course only has crap recommendations.  They really need to hire some budget travelers to get out there. We tried Oz burgers due to its high ratings. It really wasn’t anything to get excited over.  Also, what kind of monster puts beets on burgers? After eating here, I decided that maybe I’ll wait till I’m back in America to have a burger. We ate at Brew and Breakfast.  Now I am not a vegetarian by any means, but I figured I would finally try my first vegetarian restaurant. It was amazing! Since this time I have probably recommended this place at least a hundred times.  I am really missing my buffalo sauce from back home, so when I saw fried buffalo mushrooms I was sold! My bowl consisted of sauteed tomatoes, caramelized onions, pickled pink onions, spinach, hummus, and vegan eggs with a side of what looked like McDonald’s hash browns (oh yeah baby), and like I said the buffalo mushrooms.  I am salivating just thinking about this bowl. Walter ordered a bowl with cashew butter, bananas, coconut, oats, cashews, chia seeds, and some other little things. Again, amazing! This place left such a mark on me I told him for dinner we were going back. Don’t be fooled, even though it has the word “breakfast” in the name, it does have a different menu for dinner.  We both ordered loaded salads. The costs for each meal was roughly 100,000 per person ($4), although I would have paid a little more. Numerous locals had mentioned that we eat at the night market. This ended up being a bit disappointing. There were only about 3 different cheap eats options to choose from. The pricey restaurants moved their tables outside, so it looked like it would be cheaper, but they were charging about $15 a meal per person.  Out of the cheap eats options, there was Pho, Corn balls, and Vietnamese pizza. I had the corn balls and Vietnamese pizza (banh trang nuong), but shortly found out they contained the same ingredients. The pizza was a rice paper with an egg yolk spread out over it with shrimp paste, pork, and sriracha paste. The cornballs contained these ingredients on the inside. We didn’t eat out too much here since our hostel offered free breakfast. 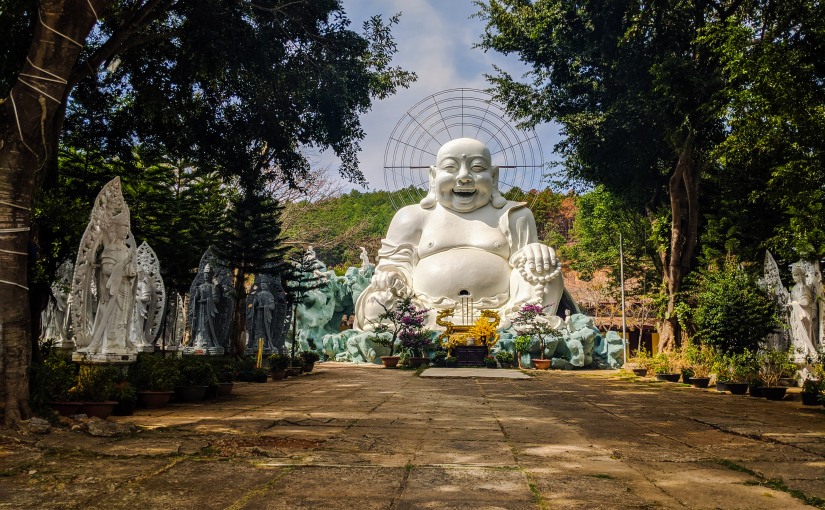 So this story starts out quite similar to the others.  I ended paying $2 more than our usual costs for a ride to the next place with Cat Thien Hai..  It was for a “limousine” with recliner chairs and lots of legroom! (See pics for guidance) However, when Walter and I arrived at the loading station for the limousine, every seat was taken so we had to cram in with the driver.  We ended up holding our smaller bags and could not stretch our legs out. I was pretty bummed, but also beginning to learn that hardly anything is going to work out to my expectations so I definitely need to learn to go with the flow.  I did email the company and provide a picture. They refunded me $4; I can’t complain. Halfway through our three-hour drive, we hear a weird noise. Walter immediately proclaims, “well that’s a flat tire”. He was correct. We luckily had a beautiful view along with the comical show.  The driver and his partner tried to lift the van with a jack, but shortly afterward the jack broke. Thankfully, a random kind stranger stopped and happened to own a jack! I think this is a common occurrence because the other three tires on the van were quite bald. Soon we were back on the road!

We stayed at the Redhouse Hostel.  The selling point was free breakfast and water.  At this point, I am tired of paying for water. A first-world privilege I now appreciate thoroughly.  There were five puppies! Which would end up making some uncomfortable situations later. All of the hostels and Airbnb’s we come across, they request to keep our passports for the duration of our stay which is out of the question to me!  We always finagle them back. This hostel wanted a one million dom deposit, which was more than double the cost of our stay, and the first time we have encountered this. Being that this is a mountain town the food was double the price of what we usually paid.  We ate at Thiet 168, Oz burgers, night market food, and Brew and Breakfast. These restaurants will be discussed more thoroughly under “Eatables” on the blog! But damn, I never thought I’d love vegan food so much. We rented a motorbike for one day to see the sights not locally near us.  We drove out to Pongour Falls and then learned that they had highways that motorbikes were not allowed on. We found this out only after we were on the road (the only motorbike on the road) and people were honking even more aggressively at us than usual. The falls were beautiful, and the entrance fee only 40,000 dom per person ($2).  It wasn’t so crowded due to tourists not wanting to travel this far away from the city. Afterward, we headed to the next falls, Datanla. They were beautiful, but the park was overrun with tourists and locals. The entrance fee here was only 30,000 dom (that is just for the falls). We then headed back to the hostel to play with the puppies before heading to the night market for dinner.  When in Dalat you will find that the locals and websites rave of the night market. It definitely isn’t worth the fuss, but I always feel as though travelers should experience all of this once. There were hundreds of people there! We parked our bike in a lot, and the parking guy asked us to keep the steering wheel unlocked, which I thought was sketchy. The market was 85% clothing with only a handful of cheap food options, and overpriced restaurants setting up shop, but not with cheaper prices.  Every now and then I will come across a food I have not yet seen on our travels. The corn balls were awesome! (Check out Eatables!) There were way too many people and with it just being clothing shops we decided to head back to the hostel. When we arrived back at the motorbike parking lot our bike had seemingly disappeared. I was freaking out! Even if it is a bike worth $200, they would charge us $1500 if something happened. After failing to find it for about ten minutes and the guy who parked it was adamant it was there, I decided to chase him down and make him come show me.  A minute later Walter thankfully located it. They had moved it to the other side of the aisle. I still do not know the reasoning for this, I was just so happy to see it.

PUPPIES!  Being surrounded by so many puppies was delightful!  However, the mom had become insanely aggressive, so anytime the puppies went near her teets, she attacked them to the point the puppies would be screaming, and occasionally a member of the owning family would kick her.  To plays devil’s advocate, the puppies’ teeth were quite sharp at this point! Poor teets. It is really hard to watch things like this and not get involved. This is not my culture and Walter and I agreed I cannot inject my beliefs on to them.  I also named one Walter because he loved being around my Walter!

Moving on.  While Walter is fascinated by the many temples of Asia, I on the other hand, want to experience nature and culture.  If you’re ever here definitely do the Countryside Tour. Dalat makes most of its income on flowers. You will see them everywhere, everyday of the year.  There are also a few hundred greenhouses smashed into this little mountain town to grow them all year long. Our first stop was one of these greenhouses to see the many different types of flowers they will grow.  Next was a village where a tribe still resided. I was pretty uncomfortable here. It was one of the poorest villages I had seen in Vietnam yet. The residents slept on a very thin mat on the dirt ground; some had no doors to their home.  The guide told us to take pictures. I did not want to treat these people like they were unknowing strangers on some TV show to entertain us so I found a local cat to play with instead. Next was a surprise. We stopped at a small village that feasted on crickets.  I never thought in my life I would find myself in this situation, but when you get the chance to experience the culture first hand, you simply cannot pick and choose when to participate! So, we ate fried crickets, sans breading, drank rice wine, rice wine brewed in a heaping helping of crickets, and Walter ate a cricket that had been soaked in rice wine.  Yup, that happened. I did not barf though; just spent the next hour getting cricket legs out of my teeth. We then visited a silkworm facility. This is how Vietnam makes their clothing and some for other countries. They literally go through millions of silkworms a year to make clothing! It is insane. One silkworm cocoon makes about one kilometer of silk, and they need anywhere from six to ten kilometers to make a shirt.  This country does not waste anything, so after they open the cocoon and kill the silkworm, they of course eat them. We visited a pagoda that held the tallest statue in Vietnam, standing 70 meters high (I don’t know the conversion either), and the biggest Buddha! We headed next door to Elephant falls which is a MUST see! You can take a super sketchy climb to the bottom of the falls, and go in a cave that is directly under the falls to feel its power.  Across the street we stopped for lunch. GAH! It was a smorgasbord for 100,000 ($4) a piece! For this one I will attach a picture! For our last stop we visited a coffee plantation. Weasels love eating the coffee cherry that holds two coffee beans on the inside. They don’t actually eat the beans, but poop them out. After this defecation the coffee beans are collected, cleaned, and brewed. The plantation has a few coffee brews that can only be found and bought in Vietnam.  They unfortunately keep the weasels locked up in cages and feed them the coffee cherries. One Polish tourist mentioned that this was inhumane and our guide quite sternly told her to accept it because this was their culture. This solidified my decision to not get involved. This marks the end of our tour, but it was the kind of experience I have been looking for!

During our time away for the day we had the hostel do our laundry.  We usually don’t have issues, but they lost two of Walter’s shirts, then the owner said it had to have been our fault.  Okay. We wouldn’t usually mind losing something, but we packed very little, so two shirts were a big part of his shirt cache.  Eventually a house cleaning employee found his shirts! As for me, during my stay I cut off part of my toe, but my bowels have finally calmed down!….to the point where they haven’t worked for five days.  I’ll take my wins where I can get them. We miss everyone back home, and I reallllllly miss Frank’s buffalo sauce, but it has still been an amazing adventure! Til next time!